Radhe: Your Most Wanted Bhai’s new song, Dil De Diya, is out. The song features Salman Khan and Jacqueline Fernandez. 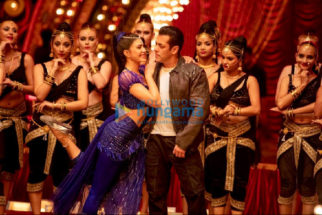 The new song of Salman Khan-starrer Radhe: Your Most Wanted Bhai, titled Dil De Diya, is out. The song features Salman Khan and Jacqueline Fernandez. The song’s music is given by Himesh Reshammiya. It is written by Shabbir Ahmed and sung by Kamaal Khan and Payal Dev.
RADHE NEW SONG DIL DE DIYA OUT

The song’s video starts with Jacqueline Fernandez showing off some awesome dance moves. Salman enters the frame later and gives a rocking performance.

Along with Salman Khan, Radhe also stars Disha Patani, Randeep Hooda and Jackie Shroff in pivotal roles. The film will be released in theatres and on multiple platforms on May 13. The producers are targeting to release the film in 40 countries across the globe. The film will be released on Zee5 with Zee’s pay-per-view service, ZeePlex. The makers have also decided to show Radhe on DTH operators like Dish, D2H, Tata Sky and Airtel Digital TV.