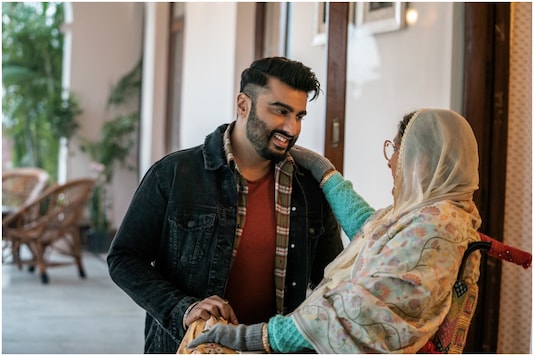 In Sardar Ka Grandson, Arjun Kapoor is playing Amreek Singh who wants to bring an old house from Pakistan to Amritsar to fulfil his grandmother’s last wish. He says that the role interested him because of its absurdity.

Arjun says, “Sometimes, somebody tells you something so bizarre that you are interested in hearing the concept. How have they written it? I thought it’s not possible but let me hear it. By the end of it, after I went through the process, I stopped doubting anything. It has got a very nice fairytale quality. You always wish somebody to go to this extent to make dreams realise.

He continues, “It was a role which had certain overlaps with my kind of humour, tongue in cheek, one liners, making people smile, having an opinion about everything and you know, being a bit of over-smart buffoon. He might think highly of himself but in reality, he is a mumbling-jumbling idiot who doesn’t know where he is going or coming from.”

I am sure I have been through such phases in my life where I was a bit like that. I think I still have that thing somewhere in my subconscious but yes, it’s always fun to play relatable and believable characters. It was a nicely written character and there are many boys like Amreek who can’t handle their personal relationship with their girlfriends but then they go to any extent for their families,” adds Arjun.

He goes on, “In a way, Sardar Ka Grandson starts from where most films end. The romance is over and the guy is in a situation where he puts his grandmother’s lovestory on priority. There are people who would take their partner for granted but would go to any extent for strangers.