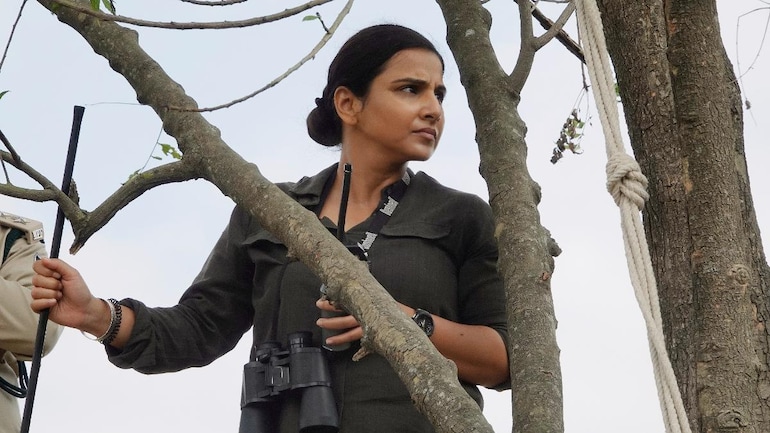 In just four days, Vidya Balan’s Sherni will drop on Amazon Prime Video, and the excitement is palpable. But, ahead of the release of Sherni, the makers on Tuesday, June 15, unveiled a new track, Main Sherni, to celebrate the real shernis of the world. The powerful track features Vidya Balan along with Mira Erda, Natasha Noel, Eshna Kutty and Trinetra Haldar and celebrates their stories of resilience. The song is sung by Akasa and Raftaar.
MAIN SHERNI TRACK CELEBRATES REAL SHERNIS OF THE WORLD

Main Sherni is a nod to the courage and resilience of the real-like shernis, women who have beaten the odds and managed to carve a niche for themselves, all the while ensuring they do not conform to the norms. The music video features Vidya Balan, along with Mira Erda, F4 Racer and Driver Coach; Natasha Noel, body-positivity influencer and Yoga trainer; Eshna Kutty, a social-media influencer and hula-hoop dancer; and Trinetra Haldar, one of the first transgender doctors in Karnataka.

Speaking about the track, Sherni actress Vidya Balan said, “The music video Main Sherni is our tribute to all the women across the globe who have this indomitable spirit of never giving up. Sherni is special for all of us and with this film and music video, we are celebrating women who have shown us that there is nothing a woman can’t do. Just like Vidya Vincent, my character in the movie, we want to show that women are fearless and powerful … and that you don’t have to roar to be a tigress. This is what we have tried to capture in this anthem.

The storyline of Sherni follows the journey of a female forest officer navigating through her marriage with her rather unusual job. Talking about how she prepared for her role, Vidya Balan said, “I actually met with a couple of forest officers to understand what exactly their job entails – the study involved in training to be a forest officer, the various postings and the challenges they posed. The nature of the job is such that it can be physically arduous and even dangerous at times which was therefore traditionally male dominated but these female officers shared how they then negotiate their way around the patriarchal mindset, all of which was very helpful.

Vidya Balan’s Sherni will release on Amazon Prime Video on June 18. Sharing the trailer of the film earlier on Instagram, Vidya Balan had written, “#SherniTrailer is out Be courageous. Be strong. Be fearless. It’s time for the #Sherni to roar! #SherniTrailer out now: https://youtu.be/o2wg-11MWFU Meet #SherniOnPrime, June 18 (sic).