Gangubai Kathiawadi has been wrapped up. Alia Bhatt shared photos from the last day on the sets with director Sanjay Leela Bhansali and other crew members. 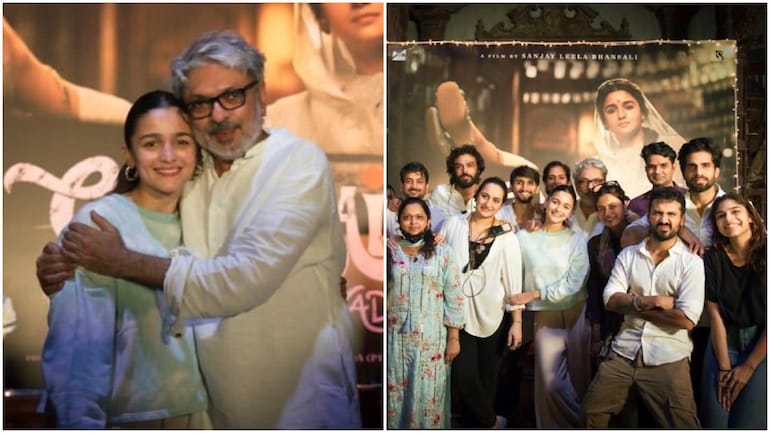 Alia Bhatt today (June 27) announced the shoot wrap of Sanjay Leela Bhansali’s Gangubai Kathiawadi. The actress shared three photos from the sets and penned a long note. Two of the photos shared by Alia feature herself with the director and the last picture is with the crew. Alia called shooting the film a life-changing experience as it took two years to complete it with two lockdowns and two cyclones amid a pandemic.
ALIA BHATT ANNOUNCES GANGUBAI KATHIAWADI SHOOT WRAP

Alia Bhatt shared three photos to announce the shoot wrap of Gangubai Kathiawadi, which is releasing on July 30. In the pictures, the actress is seen with Sanjay Leela Bhansali and the last photo feature the film crew. She wrote, “We started shooting Gangubai on the 8th of December 2019 .. and we wrapped the film now 2 years later! This film and set has been through two lockdowns.. two cyclones.. director and actor getting covid during the making!!! the troubles the set has faced is another film all together! (sic).”

She added, “But through all that and more.. what I take away is the gigantic life changing experience! Being directed by sir has been a dream all my life, but I don’t think anything would have prepared me for the journey I was on for these two years.. I walk out of this set a diff person today! I love you sir! Thank you for being you .. there is truly NO ONE like you (sic).

When a film ends a part of you ends with it! Today I’ve lost a part of me.. Gangu I love you! You will be missed. P.S – special mention to my crew – my family and friends for these two years! without you nothing would have been possible! Love you guys!!! (sic),” she concluded her note.

As the lockdown was lifted by the Maharashtra government after the second wave of coronavirus pandemic, Alia Bhatt’s Gangubai Kathiawadi was the first film to resume shooting. The team got back to the sets on June 15 to shoot a special song featuring the actress. With new SOPs and massive vaccination drives for all members of the film fraternity, shoots in Mumbai resumed on June 7 at Film City, Goregaon.

THE STORY OF GANGUBAI KATHIAWADI

The film is based on Gangubai Kathiawadi, who is said to be a woman who came to Mumbai from Gujarat with her partner. But was betrayed and sold off and pushed into prostitution. Gangubai, in the middle of the last century, built ties with many underworld criminals and got a hold over certain portions of South Mumbai. She became the owner of a brothel and is said to have worked for the uplifting of women and orphans in the red light area of Mumbai, Kamathipura.