Ajay Devgn plays an Indian Air Force officer in Bhuj: The Pride of India. The film is based on the Indo-Pak War of 1971. 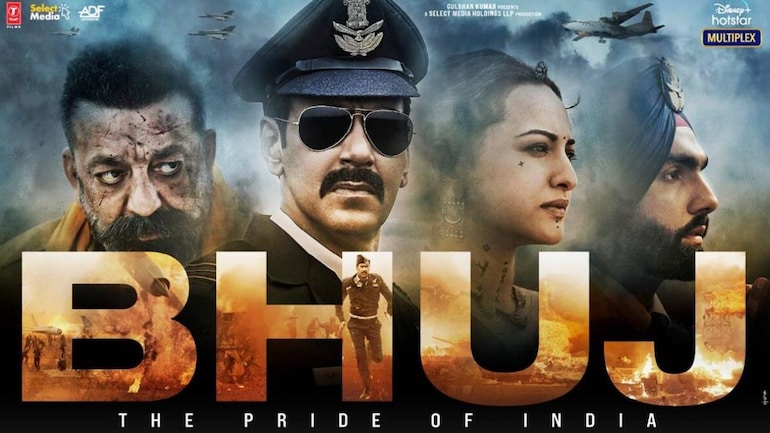 The trailer of Ajay Devgn and Sanjay Dutt-starrer Bhuj: The Pride of India is out. The film, which is based on the Indo-Pak War of 1971, is set to release on Disney+Hotstar on August 13. As expected, the trailer is full of several patriotic moments that will give you goosebumps. Ajay Devgn, in the role of Squadron Leader Vijay Karnik, ignites a feeling of patriotism with his powerful dialogues and action.
BHUJ: THE PRIDE OF INDIA TRAILER OUT

The trailer of Bhuj: The Pride of India is high on patriotism. The trailer gives a glimpse of the action and the powerful dialogues the actors will mouth in the film. Ajay Devgn plays IAF Squadron Leader Vijay Karnik, who was in charge of the Bhuj airport at the time of the war. The film details how the officer saved the area from the Pakistani army by re-constructing an entire IAF airbase along with the help of 300 women from a local village in Madhapar.

AJAY DEVGN ON HIS ROLE IN BHUJ: THE PRIDE OF INDIA

Ajay Devgn, who is donning the Indian Air Force uniform for the first time as Squadron Leader Vijay Karnik in Bhuj: The Pride of India, talked about his character in the film in a virtual press conference last year. He said, “Bhuj is a true story based on real life characters. I am playing a Squadron Leader. It is a big scale film. The story revolves around how a handful of people stop the Pakistani army when the Indian army cannot reach them in time.

Directed by Abhishek Dudhaiy, Bhuj: The Pride of India will premiere on Disney+Hotstar on August 13.