Kriti Sanon’s Mimi trailer is filled with many rib-tickling moments and at the same time it will make you cry. The actress looks promising as a surrogate mother in the trailer. 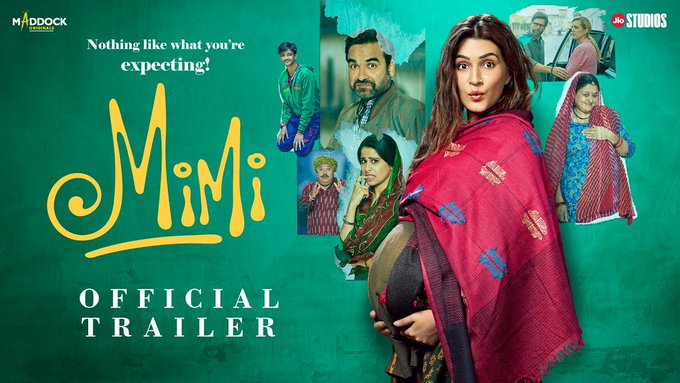 The trailer of Kriti Sanon-starrer Mimi is out. The actress is seen playing the role of a surrogate mother in the Laxman Utekar directorial venture. Mimi will premiere on Netflix and Jio Cinema on July 30. Besides Kriti, Mimi stars Pankaj Tripathi, Sai Tamhankar, Supriya Pathak and Manoj Pahwa in pivotal roles. Earlier, Kriti shared a teaser of the film to get her fans excited for her next.

After releasing the teaser of Mimi, Kriti Sanon today (July 13) shared the trailer of her upcoming film. In the film, the actress will be seen in a new avatar. She is playing the role of a surrogate mother. Pankaj Tripathi is playing an agent who comes to Kriti with the offer of surrogacy for a foreigner couple. While the trailer starts on a comic note, it soon gets intense when the couple ask Mimi to abort the child. The trailer promises that Mimi is going to be high on emotional quotient.

Sharing the trailer, Kriti wrote, “#Mimi expected everything, except for this unexpected journey! Watch the glimpse of her unexpected story with your family. #MimiTrailer out now (sic).

According to the makers, Mimi has an unusual story by Bollywood standards. It casts Kriti Sanon as a young surrogate mother. Talking about the film, the actress had earlier told IANS, “I am very excited. It’s based on the subject of surrogacy but actually it’s the story of this young girl who wants to be an actor. She’s a dancer in Mandawa and she ends up being a surrogate for a couple. Then, the things that follow change her life and also change her as a person.