Shershaah starring Sidharth Malhotra and Kiara Advani is all set to release on Amazon Prime Video on August 12. The film is based on the life of Kargil war hero Captain Vikram Batra. Sidharth, Kiara and director Vishnu Varadhan speak to IndiaToday.in about Shershaah, Captain Batra, and overall, the valour of the Indian Army. 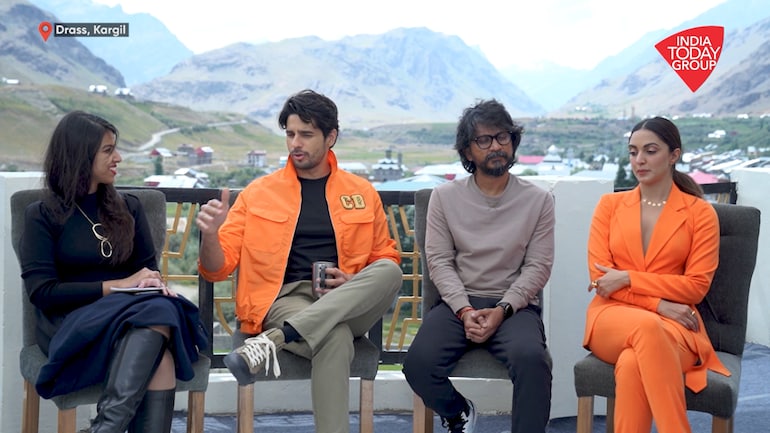 It’s not every day that you have the magnificent Tiger Hill as your backdrop for a celebrity interview. In the post-Covid world, it’s mostly Zoom backgrounds (you can get the Tiger Hill there too, perhaps, but you know what we’re talking about). So, when Team Shershaah decided to spring this very special surprise on us, we didn’t think twice. India Today was at Drass in Kargil on the 22nd Kargil Vijay Diwas to see the trailer launch. But it wasn’t the trailer that took our breath away. It was the knowledge that, in CDS General Bipin Rawat’s words, the ground where we were celebrating a trailer launch, was possible because people like Captain Vikram Batra sacrificed their lives for us.

So, we sat down with actors Sidharth Malhotra, who plays Captain Vikram Batra in the latter’s biopic Shershaah, and Kiara Advani, who plays Dimple Cheema, Vikram’s girlfriend; and director Vishnu Varadhan to discuss the movie, the Kargil War, Captain Batra’s family, and overall, the courage and valour of the Indian Army.

What was it like, wearing the Indian Army uniform, we ask Sidharth Malhotra.

“Oh, it was an amazing feeling. I can challenge any of the boys here that the moment you wear the Indian Army uniform, your body language changes, your persona changes, and that is because we have such a strong impression of the Indian Army in our head; of the decorum, of the personality, of what they represent. That was all the days that we shot wearing the uniform. But beyond that, just to get into the headspace of a real war hero, an actual hero who fought for the country and who didn’t just say these words and dialogues and he really meant it, and he really gave his life for this. It was an amazing experience. I’ve been extremely attached to this film and this character because of that. He is someone who has inspired me as well, because Vikram Batra overcame fear. He overcame the biggest fear or just fear in general that we all have, of just doing things. He broke that, that obstacle with so much confidence and such heart and such style that we have memorable lines of him saying, ‘Ye dil maange more, Sir’,” says Sidharth.

We talk about the catchphrase: ‘Yeh Dil Maange More’ and Sidharth tells us how Captain Vikram Batra was completely ‘skewed to the commercial movies and songs, and he was so influenced by the pop culture then’.

But just to imagine his mindset… sitting in one of these hilltops, completely tired or battered or bruised after a mission, and then saying to his senior, ‘Yeh dil maange more, Sir’ is an amazing high, and he’s an amazing personality, and that’s the reason we’re here today,” says Sidharth.

Captain Vikram Batra was a completely filmi person, from what his father, mother, or Dimple remembers; so, there was a Bollywood movie waiting to be made on him. How did director Vishnu Varadhan decide to make a movie on the story? Varadhan, who is making his Bollywood debut with Shershaah, tells us ‘honestly’ that he was not ‘supposed to be on the project’.

“That’s how things happen, you know… Some of the best things happen like that; they come to you when you’re not going after them, or when you don’t think about them. So, Sandeep Srivastava, who is the writer, was writing another feature film for me. So, we were discussing that film when Shershaah came to him. He wanted a director’s perspective, so he was talking to me. The more and more I got to know about Captain Vikram Batra, the more interested I became in his story,” says director Vishnu Varadhan.

We move to Dimple Cheema, the most intriguing person in the story of Captain Vikram Batra. Now Dimple is a person who is extremely media-shy. She chose to stay away from the limelight. She chose to not marry anyone after the death of Captain Batra. And all these years, she has led a life surrounded by the memories of Vikram, as Captain Batra’s father GL Batra puts it in his book on the Shershah of Kargil.

So, what did Kiara have to go through, while playing a person like Dimple?

“I, fortunately, got to meet Dimple, and kept asking myself, ‘did this really happen?!’ When I heard her re-living all those moments with Vikram, it was like… goosebumps. It was too good to be true. It’s amazing just to know a person like her; to know how strong she is. And it is so lovely, endearing to meet someone like her. Someone you are so intrigued by. Even I was so intrigued by her. I’d heard she was very media-shy; I knew she didn’t want to give any interviews. She didn’t want the limelight. A lot of respect to her for taking that time out, and I’m sure she did it for her love for Vikram Batra. She knew this film was being made and she took her time out to lend her side of the story. Just to see the kind of sacrifices made by the people behind the Indian Army officers… we don’t always get to see those sacrifices, and through her, I just felt that it was such a big sacrifice. You just feel proud that your man is going out there and he has got this passion, and also to kind of put yourself second and be like, ‘but I love him’. And she had her own set of hurdles, and to just overcome all of that speaks volumes about her,” says Kiara.

Sidharth and Kiara’s fans are obviously waiting with bated breath to see their chemistry on screen. There are all the link-up rumours, after all. We prod on, whether we will get to see a film on Dimple’s story, and director Vishnu Varadhan tells us that they were just grateful to Dimple for sharing her side of the Vikram Batra story. “We’re just thankful to her for sharing her story. Had she not, this would have just been a fictional tale!” says Vishnu.

Vikram Batra’s is a story that has been out in public since the Kargil War. So, what is it that Shershaah is doing?

Director Vishnu says, “It’s purely history being translated, you know. We will give you what actually happened. Unlike a game of Chinese Whispers. He was multi-faceted. We spoke to multiple people and all of them said different things about him. Now, we bring all of that together and show you what Vikram Batra was.”