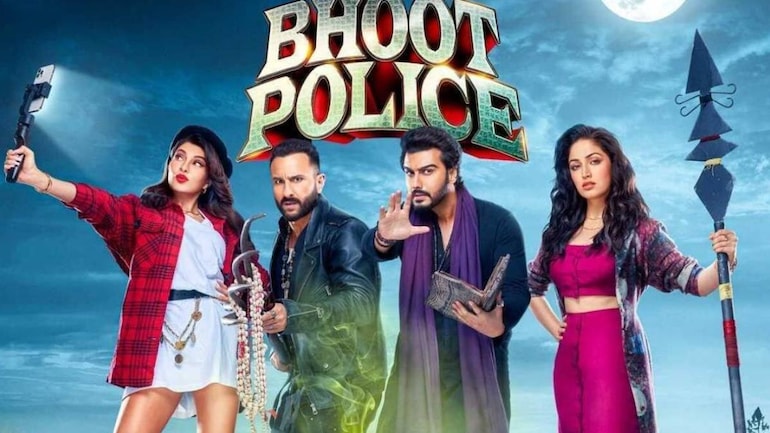 The title song of Saif Ali Khan and Arjun Kapoor-starrer Bhoot Police was released today (August 26). The song features the two actors with Jacqueline Fernandez. Yami Gautam, who also stars in the film, is missing in action. Directed by Pavan Kripalani, Bhoot Police is set to premiere on Disney+Hotstar on September 17.
AAYI AAYI BHOOT POLICE OUT

Aayi Aayi Bhoot Police is the title song of the upcoming film Bhoot Police. The music video features Saif Ali Khan, Arjun Kapoor and Jacqueline Fernandez. The actors are seen showing off their dancing skills in the song, which is sung by Vishal Dadlani, Sunidhi Chauhan and Mellow D. The music is composed by Sachin-Jigar while its lyrics are penned by Kumaar and rap by Mellow D.

Arjun Kapoor, who will be seen playing the role of Chiraunji in Bhoot Police, took to social media to release the title song. He encouraged fans to party with the new song. He wrote, “Party hard with #BhootPolice. #AayiAayiBhootPolice is out now. Crank up the music and tune in!

In Bhoot Police, Saif Ali Khan and Arjun Kapoor play Vibhooti and Chiraunji, respectively. They go around catching ghosts. While for Saif his profession is a way to con people, Chiraunji takes his work seriously. The two ghosthunters meet Jacqueline Fernandez and Yami Gautam on a mission to ward off a notorious spirit.

Bhoot Police shoot began in Himachal Pradesh in November 2020. The horror comedy was also shot in Jaisalmer. While the film was earlier scheduled to release in theatres on September 10, the film will now release on Disney+Hotstar on September 17.

Amitabh Bachchan shared a new song from his upcoming film, Chehre. Composed by Vishal-Shekhar, Big B gave his voice for the title track. 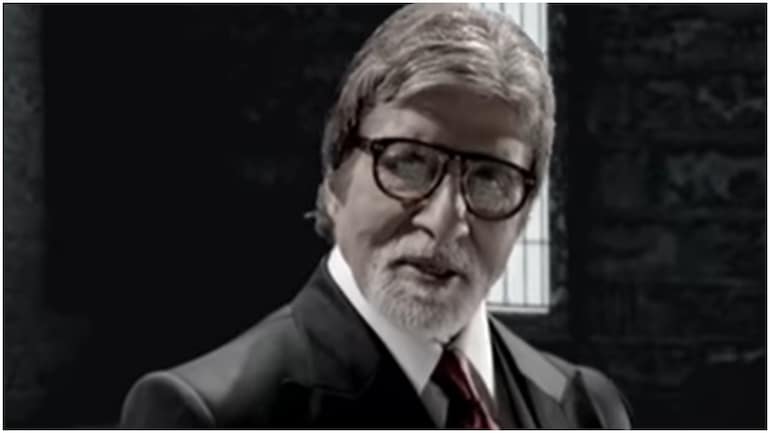 Amitabh Bachchan has treated fans to a new song from his much-awaited film, Chehre. He dropped the title track of the film on social media today (August 23). In the music video, Amitabh Bachchan can be seen in an intense look. Sung by the actor himself, the track has been composed by singer duo Vishal Dadlani and Shekhar Ravjiani.
NEW TITLE TRACK OF CHEHRE OUT

After dropping the trailer of Chehre on August 13, the film’s new title track has been released on August 23. Featuring Amitabh Bachchan, the song describes how faces (chehre) showcase various human expressions during different phases of life. Big B’s intense look with his powerful voice will leave you absolutely spellbound. Composed by singer duo Vishal Dadlani and Shekhar Ravjiani, the lyrics of the song has been penned by Rumi Jaffery.

On August 18, the makers of Chehre treated fans to its first song, Rang Dariya. It is a soulful track that shows Emraan Hashmi and Krystle D’Souza totally in love. In the video, they both can be seen going on dates and being in love. The romantic track was crooned by Yasser Desai and has been composed by Gourov Dasgupta.

Produced by Anand Pandit Motion Pictures & Saraswati Entertainment Private Limited, Chehre is all set to release on August 27. It stars Amitabh Bachchan and Emraan Hashmi in lead roles. While Big B is playing the role of a lawyer, Emraan is a business tycoon in the mystery thriller. Besides them, Chehre also features Krystle D’Souza, Rhea Chakraborty, Siddhanth Kapoor, Annu Kapoor, Dhritiman Chatterjee and Raghubir Yadav in pivotal roles. 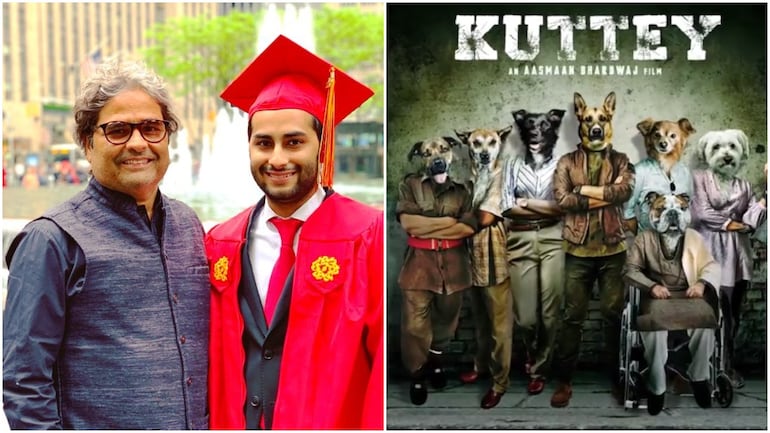 Making the announcement about Aasmaan Bhardwaj’s directorial venture, the motion poster of Kuttey was unveiled on Monday, August 23. The film promises a thrilling ride. Vishal Bhardwaj took to social media to share details of the film. He wrote, “Na ye bhaukte hai, na gurrate hai. Bas kaat te hai! (They neither bark, nor growl. They just bite!) Presenting #KUTTEY (sic)!” There are several men with dog heads in the poster of Kuttey.

Talking about Kuttey, Vishal Bhardwaj said, “Kuttey is extremely special to me as it is my first collaboration with Aasmaan and I’m excited to see what he does with it. Luv Films and Vishal Bhardwaj Films are also coming together for the first time and I am immensely excited about this association, as I really admire Luv’s brave attitude towards filmmaking and strong commercial sense. I have worked with Naseer Sahab, Tabu, Konkona and Radhika on different films throughout my career and Aasmaan has brought them all together in one film itself. We cannot wait for the audience to witness this captivating thriller on the big screen.
Luv Ranjan also spoke about the project, “Vishal ji is one of the most prolific filmmakers in our country. His storytelling and vision as a filmmaker have been very inspiring for me personally. It gives me immense happiness that I am getting to collaborate with him for Aasmaan’s film.”

Kuttey is written by Aasmaan Bhardwaj and Vishal Bhardwaj and presented by T-Series. The film’s music will be given by Vishal Bhardwaj, while Gulzar will pen the lyrics. It is touted to be a caper-thriller. While the film is currently in its pre-production stage, the shoot will commence by the end of 2021.
Aasmaan has a degree in filmmaking from the School Of Visual Arts, New York City. He has previously assisted his father, Vishal Bhardwaj, on films such as 7 Khoon Maaf, Matru Ki Bijlee Ka Mandola and Pataakha.

Bhuj The Pride Of India Movie Review: Even with Ajay Devgn looking all suave in that Air Force uniform, for us, the film belongs to Sharad Kelkar. 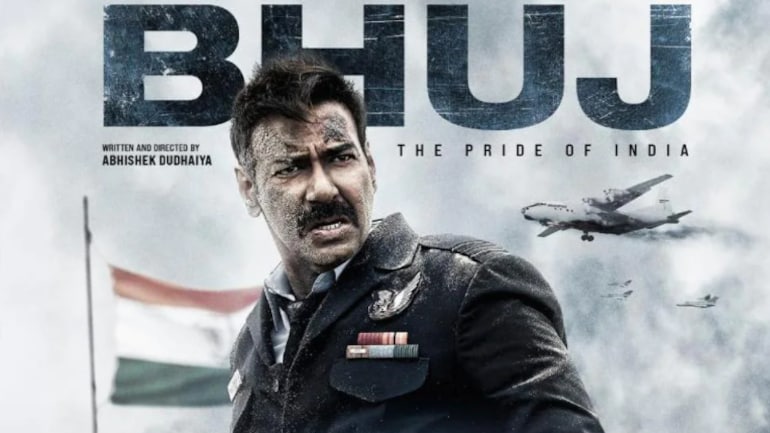 300 against a battalion. The story of how the airstrip at Bhuj, Gujarat was rebuilt in just about 72 hours in December 1971, after it was bombed down by Pakistani jets, is one of those war stories that fills your heart up with pride. Ajay Devgn as Indian Air Force Squadron Leader Vijay Karnik, in Disney+Hotstar’s Bhuj: The Pride Of India, brings you that true story against the backdrop of the Indo-Pak War of 1971. Arousing as it is, it is not without exaggeration.

Bhuj: The Pride Of India opens to the very fight that destroyed the airstrip. Unprepared and helpless soldiers at the Bhuj airbase ran helter-skelter as Pakistani jets dropped bomb after bomb. The devastation both on land and in their eyes was enough to let your heart sink for a moment. How would Karnik salvage the situation? And if he fails, one of India’s most important airbases stands to be captured by the enemy. At this point, there is no othering, Pakistan and India are truly at war in East Pakistan, today’s Bangladesh. And Bhuj is key for both nations as an attack in the west will only act as a blow to India’s focus on the eastern frontiers.
As IAF Squadron Leader Vijay Karnik, Ajay Devgn is well within his comfort zone. His quiet but resolute stares quickly establish him as a calculating, dependable Indian soldier who will save the day. That bits and pieces of news articles from the time still remain in the public psyche certainly helped. But Karnik is not the only hero in the story, and that’s where Bhuj, the film, and Bhuj the true events diverge, at least in director Abhishek Dudhaiya’s vision. Military officer RK Nair, brought to life by Sharad Kelkar, Ranchhod Pagi, played by Sanjay Dutt, Flight Lieutenant Vikram Singh, essayed by a superb Ammy Virk, and the women of Madhapar, a village in Bhuj, headed by Sonakshi Sinha’s Sunderben Jetha, demand as much a share of the pie.

Even as Bhuj, the film, meticulously narrates their plight, shows them fighting, bleeding, dying, the focus and the camera remains firmly on Ajay. Though Sharad and Sanjay have been given some dramatic dialogues, the film clearly establishes a hierarchy – Bhuj: The Pride of India is headlined by Ajay Devgn.

The women in the film have it worse still. Nora Fatehi as Heena Rehman, an Indian spy in Pakistan, had more screen-time ratio in the trailer than in the film. Sonakshi, on the other hand, again with some arousing dialogues, is reduced to both literal and figurative drum-beating. In terms of performances, it is hard to comment considering both Nora and Sonakshi had so little scope.

At 150-odd minutes, which might seem a tab bit long for OTT viewing, even with the unnecessary drumming and dialogues, Bhuj goes on smoothly. The picturisation is perfect, the post-effects ensure the war scenes were seen and felt, although the editing in the scene transition aspect could have been tighter. As for the factual errors, you can watch this to find out. There’s but one scene which ticks the product-placement box, we shall let you see it yourself when you do.

Final thoughts? Even with Ajay Devgn walking in slow motion, looking all suave in that IAF uniform, for us, the film belongs to Sharad Kelkar. And that’s a shame; this is his second Disney+Hotstar film where despite being the clear hero, he remains in the shadow of the bigger star. Which was the first film, you ask? Laxxmi.

Kajol watched husband Ajay Devgn’s Bhuj: The Pride of India in a theatre and took to Instagram to praise the film. She also wrote she is proud of Ajay. 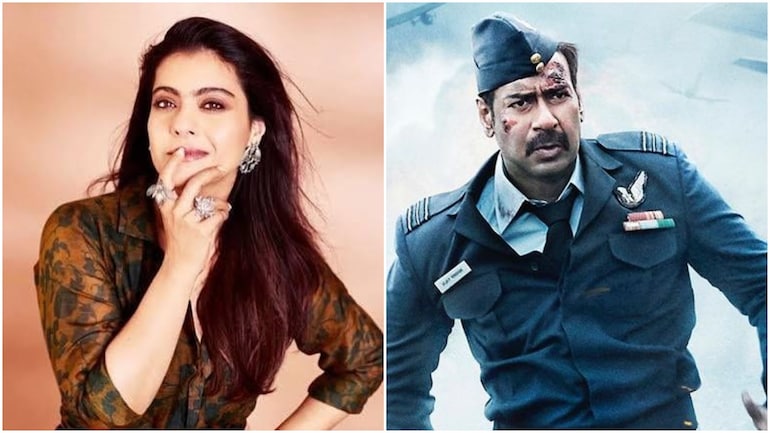 Ajay Devgn is excited about his new film, Bhuj: The Pride of India. He recently attended a special screening of the film with his family. His wife Kajol took to Instagram to praise the film and describe the experience of watching it in a theatre. She also wrote that she is proud of Ajay.
KAJOL WATCHES BHUJ THE PRIDE OF INDIA, SAYS WHAT AN AWESOME HIGH

Ajay Devgn’s daughter Nysa reviewed Bhuj: The Pride of India and called it sensible. His wife Kajol saluted the Indian Army after watching the film and wrote she feels proud of her husband. She wrote, “My theatre experience after soooo long! What an awesome high.. reminds us of all the things we take for granted without ever worrying about who is giving us the safety and security of just being normal.

ABOUT BHUJ: THE PRIDE OF INDIA

Bhuj: the Pride Of India is directed by Abhishek Dudhaiya. Ajay Devgn plays the role of IAF Squadron Leader Vijay Karnik in the film. The real-life hero had protected the border area in Gujarat from the Pakistani army during the 1971 Indo-Pak War. He also reconstructed an IAF airbase with the help of 300 women from a local village in Madhapar.

Allu Arjun has announced that Pushpa – The Rise (Part 1), will release in theatres on Christmas, December 25. The film will clash with Aamir Khan and Kareena Kapoor-starrer Laal Singh Chaddha at the box office. 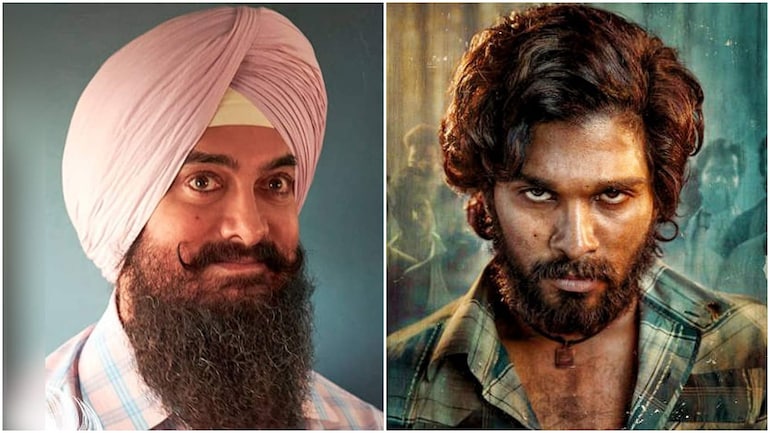 Two big films, Laal Singh Chaddha and Pushpa – The Rise (Part 1), will clash at the box office this Christmas, December 25. While the former stars Aamir Khan and Kareena Kapoor Khan in the lead roles, the latter stars Allu Arjun and Rashmika Mandanna. The announcement about the box office clash between the highly-anticipated films has made fans excited.
ALL ABOUT AAMIR KHAN, KAREENA KAPOOR’S LAAL SINGH CHADDHA

Laal Singh Chaddha is the Hindi remake of the Hollywood blockbuster Forrest Gump. The iconic Hollywood film starred Tom Hanks in the lead role and released in 1994. Directed by Advait Chandan, Laal Singh Chaddha was earlier scheduled to release on December 25 last year. However, it got delayed by a year due to the novel coronavirus pandemic. Kareena Kapoor, who plays the female lead in Laal Singh Chaddha, wrapped up her shoot schedule in October. Taking to Instagram, she shared a picture with Aamir Khan and thanked him and director Advait for an ‘intense yet poignant journey’.

Laal Singh Chaddha is jointly produced by Aamir Khan, Kiran Rao and Viacom 18 Motion Pictures. South star Naga Chaitanya will be making his Bollywood debut with Laal Singh Chaddha. He plays the role of Bala in the film.

Allu plays a smuggler of red sandalwood in the upcoming film, while Rashmika Mandanna plays the female lead. Fahadh Faasil will be seen playing the main antagonist. Pushpa – The Rise follows the story of Pushpa and the heist of red sandalwood, which is a rare species of timber found in Andhra Pradesh.