Kartik Aaryan is playing the role of a prime-time news anchor in Dhamaka. Directed by Ram Madhvani, the film is releasing on Netflix on November 19. 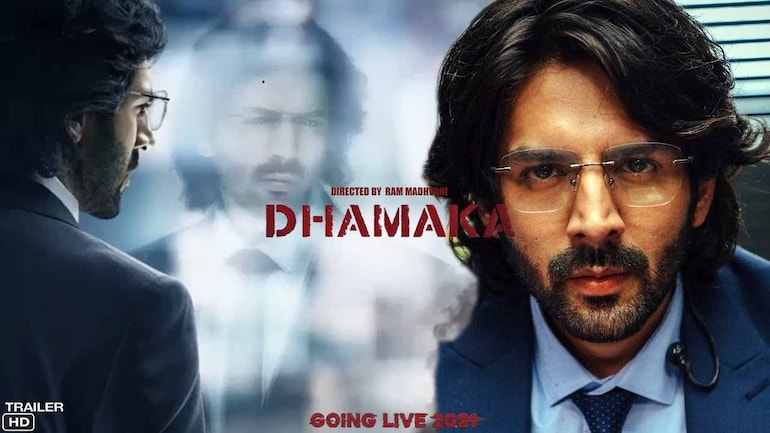 The trailer of Kartik Aaryan’s Dhamaka is out. Directed by Ram Madhvani, the film will premiere on Netflix on November 19. The film also stars Amruta Subhash, Vikas Kumar and Vishwajeet Pradhan. Mrunal Thakur will be seen as Kartik Aaryan’s wife in the film. In Dhamaka, Kartik is playing the role of a prime-time news anchor, who became a radio jockey.
KARTIK AARYAN LOOKS INTENSE IN DHAMAKA TRAILER

The teaser of Dhamaka was released in March 2021. Today, October 19, the makers of the film released its trailer. It features Kartik Aaryan as Arjun Pathak, a prime-time news anchor who became a radio jockey. The trailer shows Arjun getting a call about a bomb attack on Mumbai’s Banda Worli Sea Link during his radio programme. He then negotiates his terms with the news channel head (Amruta Subhash) and asks her to give him his position of prime-time anchor in return for the exclusive. He tells her that he will break the news. He then talks to the terrorist on prime-time. Arjun is also seen handling a personal matter.

The trailer then shows Arjun fighting his conscience as he gets stuck in a situation. He must make a choice between his career and the humanist in him. Arjun is struggling with his lines and telling the crew to switch off the cameras. Then Amruta Subhash motivates him to do his job and tells him that the show must go on. Despite saying that he cannot do it, Arjun finally resumes his job and delivers his lines.

On October 18, Kartik Aaryan announced that the trailer of Dhamaka will release today (October 19) with a new poster. In the poster, the actor is seen teary-eyed while Mumbai Sea Link can be seen on fire. Sharing the poster, he wrote, “Kal hoga #Dhamaka Trailer out tomorrow.

Dhamaka is a film based on the workings of a news channel. Kartik Aaryan will be seen in the role of a prime-time news anchor. The film has been shot in Mumbai during the novel coronavirus pandemic in a record 10 days. Necessary precautions were ensured, the entire unit of the film was tested for Covid-19 and was quarantined in a hotel before the commencement of the shoot.