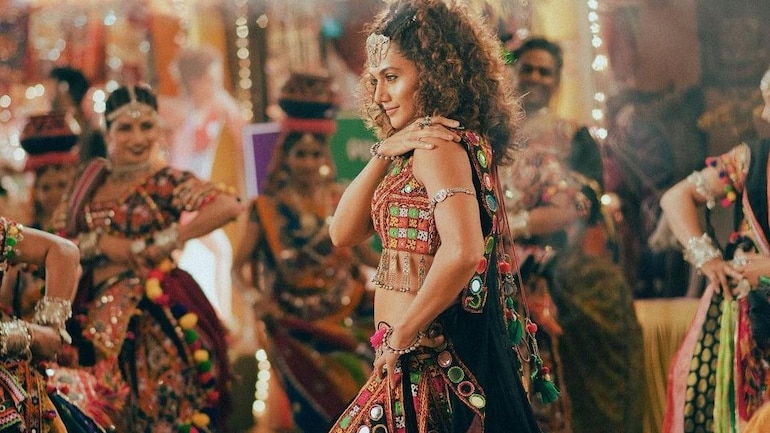 Taapsee Pannu is looking forward to the release of her sports drama, Rashmi Rocket. The first song of the film, Ghani Cool Chori, dropped on September 28. Now, Taapsee has shared an anecdote about the song. The lehenga she donned in the energetic number weighed 13.5 kg. The actress joked that it was weightlifting in disguise.
TAAPSEE PANNU SHARES RASHMI ROCKET’S GHANI COOL CHORI BTS VIDEO

Taapsee Pannu’s Ghani Cool Chori is a Navratri treat for her fans from her upcoming film, Rashmi Rocket. The actress took to Instagram recently to share a behind-the-scenes video from the song’s shoot. She revealed that it weighed 13.5kg. “You saw the song, time to see the COOL crew behind it! My only anecdote is that this lehenga was weightlifting in disguise, it weighed 13.5 kg #GhaniCoolChori #RashmiRocke she wrote.

Taapsee Pannu plays a Gujarati athlete in Rashmi Rocket. Its song, Ghani Cool Chori, was released recently. The actress can be seen donning a traditional ghagra-choli and showing off her desi dance moves in the song composed by Amit Trivedi and sung by Bhoomi Trivedi.

Directed by Akarsh Khurana, Rashmi Rocket addresses the gender testing issue which female athletes have to face, as their bodies get tagged as ‘mardaana’ or not ‘conventionally feminine. The film will release on Zee5 on October 15. Rashmi Rocket’s cast also features Priyanshu Painyuli, Abhishek Banerjee and Supriya Pathak.