Bunty Aur Babli 2 is enjoyable when the camera is on Rani Mukerji and Saif Ali Khan. And yes, you will miss Abhishek Bachchan. 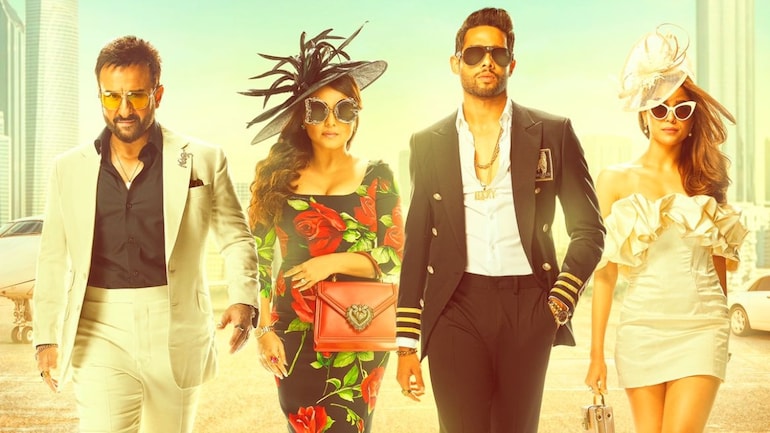 Bollywood’s original heist duo is back. However, this time, with a makeover and a new team. The original Bunty and Babli – Abhishek Bachchan and Rani Mukerji entertained the audiences in 2005. Abhishek and Rani’s instant charm and impeccable chemistry contributed big time to the film’s success. Flash forward 16 years, and we have a Bunty aur Babli redux, jazzed up with a makeover and two new entrants. Directed by Varun V Sharma, the film has Saif Ali Khan replacing Abhishek Bachchan as Bunty, Rani reprising her Babli act, and two new faces – Siddhant Chaturvedi and Sharvari Wagh giving the franchise a younger fresh appeal.

The plot is pretty simple. The original Bunty and Babli face their biggest fear of being redundant and their brand being tarnished by two youngsters using their names to con people in the city. Now-retired Saif and Rani are happy in their family life until Inspector Jatayu Singh (Pankaj Tripathi) lands at their doorstep to arrest them for a robbery they didn’t commit. Now, the original B and B not only have to defend their brand but also hunt down the impostors and protect their legacy. Sounds fun right?

Bunty Aur Babli 2 has a lot that works in its favour. The writing is crisp, the dialogues laced with dollops of witty humour and Pankaj Tripathi is at his best. Also, the pace and length of the film work in its favour. It’s tight and doesn’t drag its feet in important scenes. Rani Mukerji as Babli is a major highlight. Her comic timing and humour are quite a revelation, and showcases a side we haven’t seen before. The over-the-top outfits and garish makeup only add to the caricature that is Babli – and what we love about her.

Amongst the youngsters, Sharvari exudes confidence and has immense potential. Even beneath the prosthetics and makeup, she has a spark and looks like this is what she was born to do. Siddhant uses his charisma to his advantage and goes full throttle when it comes to playing up his Casanova image.

The big elephant in the room is Saif Ali Khan replacing Abhishek Bachchan as Bunty. Those are big shoes to fill. Though the comparisons are unfair, there is an issue is with the casting. As the bumbling Bunty from Fursatganj, he feels out of place and a bit lost. Oddly enough he looks the most comfortable in his designer suits in the second half. You can’t help but think of Abbas-Mustan’s Race when you see a good-looking Saif Ali Khan donning stylish shades.

The songs and music in Bunty Aur Babli 2 are forgettable. That was one of the biggest reasons why the first one worked, with foot-tapping tracks like Kajra Re, Chup Chup Ke and the catchy title song. In fact, this one has a scene with the original Kajra Re playing in the background, which serves as a bleak reminder of how bad the music in the second part is.

Bunty Aur Babli 2 is enjoyable when the camera is on Saif and Rani. There is a chase sequence between the original Bunty-Babli and the newbies, which is a major highlight and is well shot. Overall, the film is entertaining and worth a watch. Yes, you will miss Abhishek and Rani’s chemistry, but don’t let that not be a reason for you to skip the film.