The trailer of Shahid Kapoor’s Jersey dropped on November 23. Directed by Gowtam Tinnanuri, the film stars Mrunal Thakur as the female lead. 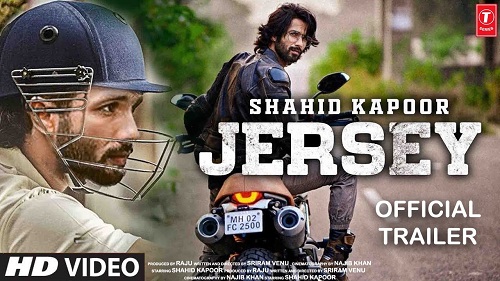 Shahid Kapoor-starrer Jersey is all set to release in theatres on December 31, 2021. The sports drama also stars Mrunal Thakur. Directed by Gowtam Tinnanuri, the film’s trailer was released on November 23.

Jersey is the Hindi remake of a Telugu film of the same title. Its trailer shows Shahid Kapoor’s character struggling to make ends meet after leaving his cricket career behind. He tries to get back on the filed for his son. He tries to earn his child’s respect and not be considered a failure by him like everyone else.

Sharing the excitement about Jersey, Shahid wrote on Instagram, “ITS TIME ! We have waited to share this emotion with you for 2 years. This story is special. This team is special. This character is special. And the fact that we get to share it on the big screen with you all is special. I don’t have words to express my gratitude. I hope you all feel what I felt when I played him.

The official description of Jersey reads, “An ex-cricketer struggling to make ends meet, wants to fulfill his child’s wish of getting a Jersey but in the process comes face to face with his heroic past and is forced to decide if he will rise to the occasion and become a symbol of hope or continue to live a life as a loser? A heartwarming story starring Shahid Kapoor, Mrunal Thakur and Pankaj Kapoor that will make you embrace your dreams, hopes and family.