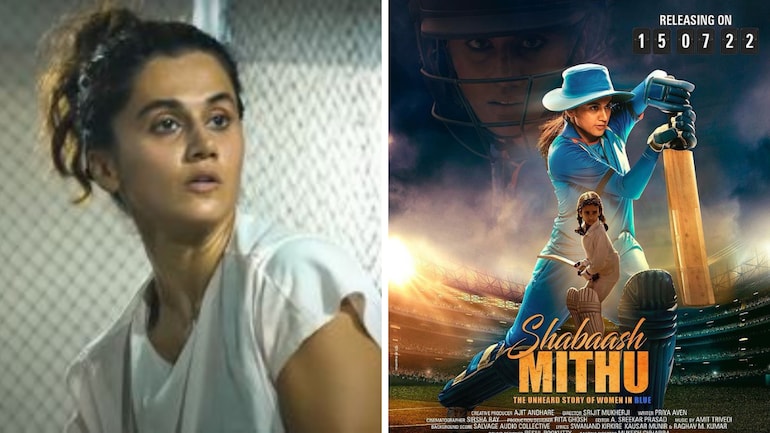 When it comes to perfecting offbeat roles, you can totally depend on Taapsee Pannu to shoulder it effortlessly. The actress, who is playing Indian cricketer Mithali Raj in Shabaash Mithu, is currently busy with promotional activities. However, stepping into Mithali’s shoes wasn’t an easy task. Blood, sweat and bruises were involved. Taapsee took to social media and shared a video of how she got onto the skin of her character in the Srijit Mukherji directorial.
HOW TAAPSEE PREPPED FOR SHABAASH MITHU

Shabaash Mithu plays cricketer Mithali Raj in Shabaash Mithu. It will be interesting to note what she brings to the table this time. On July 5, the actress took to Twitter and shared a video of how she prepped to play Mithali. From maddening prep sessions to blood, sweat and bruises, the actress revealed it all in a BTS video.

The trailer of Shabaash Mithu dropped on June 20. The film follows cricketer Mithali Raj’s journey who is known for her record-breaking 23-year-long career in international cricket. She made over 10000 runs in ODI. The film is a tribute to the recently retired icon. The message of ‘nazariya badlo, khel badal gaya’ is encapsulated in the trailer with compelling dialogues and glimpses of Taapsee playing Mithali with utmost conviction.

Shabaash Mithu is a biographical sports drama film directed by Srijit Mukherji and produced by Viacom18 Studios. The film is based on the life of former Test and ODI captain of the India women’s national cricket team, Mithali Raj. It stars Taapsee Pannu in titular role. Directed by filmmaker Srijit Mukherji and written by Priya Aven, the film is a coming-of-age story of women’s cricket in India as witnessed by the most successful woman cricketer. It will chronicle the highs and lows, setbacks and moments of euphoria of Raj’s life.